Stephen Evans, chief executive of Learning and Work Institute, said:
The labour market continues to bounce back strongly with payroll employment now recovering almost four fifths of its fall during the pandemic and online vacancies above one million for the first time. Employment rose most strongly for groups like young people who had seen the largest falls. This suggests a labour market heading in the right direction and increasingly tight for employers looking to recruit. Yet employment is still down with 201,000 fewer people in payroll employment than in February 2020 and long-term unemployment is up 40%, while older workers are now most likely to be furloughed. To ensure the jobs recovery doesn’t run out of steam, we need to do more to link those out of work with available vacancies, particularly given significant numbers of people remain furloughed ahead of the scheme’s closure in September.
Explore full analysis

1. The labour market continues to recover with payroll employment now recovering 79% of its fall during the pandemic

Employment rose by 95,000 in April to June 2021 compared to the previous quarter but is 797,000 lower than before the . The timelier measure of PAYE employees increased by 182,000 in July 2021 compared to the previous month, but is still 201,000 lower than before the pandemic. There is a large difference between the estimated changes in the two measures of employment, in part explained by the Labour Force Survey estimating a significant fall in self-employment which is not included in the HMRC payroll data.

Unemployment is up by 236,000 from before the pandemic, but fell by 53,000 in April to June 2021 from the previous quarter. The number of people claiming unemployment-related benefits fell by 7,800 in July 2021 compared to the previous month, to stand at 2.29 million. Increased employment support from Jobcentre Plus could help to bring claimant unemployment more in line with the survey measure of unemployment in the months ahead.

2. Online vacancies remain above pre-pandemic levels and hours worked is close to pre-crisis levels too

The number of online vacancies as measured by Adzuna fell by two thirds during the spring 2020 lockdown but has risen above its pre-crisis levels as the economy has reopened, though with significant sectoral and geographical variations.

The furlough scheme meant the labour market adjusted to lockdowns more through hours worked than by changes in employment. With lockdowns now easing across the country, the total number of hours worked returned to 94% of the February 2020 level at the end of June 2021 after an earlier reduction during the November-March lockdowns. In significant part, this reflects falls in the number of people furloughed, as the economy began to reopen. 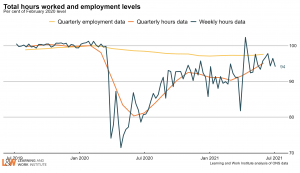 3. Despite falls, significant numbers remain furloughed ahead of the scheme’s closure in September

The latest survey data, looking at the extra number of people temporarily away from work compared to before the pandemic, suggests further falls in use of the furlough scheme over the summer. While difficult to interpret, the number of people fully furloughed could be around 500,000. The furlough scheme will end at the end of September 2021 and it is uncertain whether those furloughed will have jobs to return to or need to find new employment.

The longer someone is out of work, the less likely they are to find work. Long-term unemployment can have damaging impacts on people’s career prospects, particularly young people, as well as to health and wellbeing.

5. Young people continue to be among those hardest hit, but older workers are now more likely to be furloughed

Young people account for 39% of the fall in employment, despite accounting for just 12% of total employment. As a result, the number of unemployed 16-24 year olds has risen 16,000 since the last pre-pandemic figure and 412,100 18-24 year olds are claiming unemployment-related benefits, 75% up on pre-crisis levels.

Employment for young people is recovering, though they continue to have seen the biggest drop in payroll employment. However, older workers are now more likely to be fully furloughed than younger workers. L&W research has showed that previous employment programmes have worked less well for older people aged 50 and over. It is therefore essential that targeted help is provided to older people, including those who are furloughed.

6. Employment is recovering across the country, but remains uneven and unequal

The number of payroll employees is now at or above pre-pandemic levels in Cambridgeshire and Peterborough, Greater Manchester, Liverpool City Region, North of Tyne Combined Authority, Northern Ireland, Tees Valley, Wales and West Yorkshire. In these areas there is also a positive change on July 2019, and in other areas that have not passed the February 2020 level. But employee numbers remain more significantly lower in London, in part reflecting the importance of commuting, tourism, retail and hospitality to London’s economy. Scotland is also still down on both Feb 2020 and July 2019.

Furlough rates fell across the country during June as the economy reopened. Nationally, total take-up rates decreased from 15% at the end of March to 7% by the end of June, and rates fell in every local authority area.

But furlough rates remained relatively high in many parts of the country, particularly those that have seen sharp increases in the claimant rate. One in eight employees in the London boroughs of Hounslow and Newham were furloughed at the end of June – areas that have seen among the highest claimant count rate increases since March 2020.