Stephen Evans, chief executive of Learning and Work Institute
The economic fallout from the pandemic is becoming clearer, with unemployment rising and employment falling. The furlough scheme has protected millions of jobs, but the prospect of a cliff edge in support at the scheme’s planned end in October while restrictions continued contributed to a spike in redundancies. The late extension of the scheme came too late to prevent that. The lesson is that support needs to be in place for as long as economic restrictions last. Otherwise we risk a further raft of redundancies when furlough is due to end in April. We also need further urgent action to help those who have already lost their jobs through the crisis. Young people have been particularly hard hit, but while the Government has taken many of the right actions, delivery remains a challenge: Kickstart has had to be revised to get delivery going while a promised expansion in Traineeships is yet to materialise. Time for a Youth Guarantee to ensure all young people are offered a job, apprenticeship or training place.
Explore full analysis

The overall picture is of a labour market facing a large shock in spring 2020 with some stabilisation more recently. Employment has fallen and unemployment has risen, but both remain relatively strong by historical standards. Similarly redundancies are high but may be at their peak. Economic support like the furlough scheme has done its job, making sure the impact of the crisis is felt primarily on hours worked rather than employment. However, two challenges lie ahead.

The second is to restart the labour market and help those who have lost their jobs during the crisis with the claimant count (a measure of those claiming unemployment-related benefits and which includes some people with some earnings from work) having more than doubled since March 2020. Young people have been particularly hard hit, with 200,000 fewer 16-24 year olds in work than a year ago, the largest fall of any age group.

The number of hours worked across the economy provides an important measure of the impact of the pandemic on economic activity.

The number of hours worked across the UK fell by 29% from 1,044 million hours at the start of the March 2020 lockdown to 746,000 in late April 2020 before gradually recovering. The latest data shows that the number of hours worked did not fall in the November lockdown (which had fewer restrictions than the March lockdown) and by the end of the month exceeded 1,000 million hours for the first time since March 2020.

The number of job vacancies available also provides a timely measure of the health of the labour market and confidence of employers.

The impact has been particularly stark in retail and hospitality. After a slight recovery in summer and early Autumn – boosted in part by the ‘Eat Out to Help Out’ scheme – vacancies in hospitality have again fallen back, and are approaching the levels seen in the first lockdown. Vacancies in January 2021 were down three quarters (74%) on the previous year.

Similarly, vacancies in wholesale and retail were recovering strongly in the Autumn, before falling back again with the closure of non-essential retail. The number of vacancies in the sector in January 2021 was 57% lower than a year before.

Redundancies are high but may have peaked

Other data suggest the number of redundancies may have peaked. But its clear that economic support needs to last as long as restrictions are in place to limit job losses. The Government should make this clear, including committing to extending the furlough scheme further if restrictions limit economic activity beyond April. Otherwise we risk a further wave of redundancies.

The economic impact across the four nations of the UK

Decisions on lockdown measures are devolved, and the four nations have differed in their approach to controlling the spread of the virus. The skills system is also devolved, as are parts of employment support. However, some aspects of the labour market response, including the Coronavirus Job Retention Scheme and Kickstart, are UK-wide. 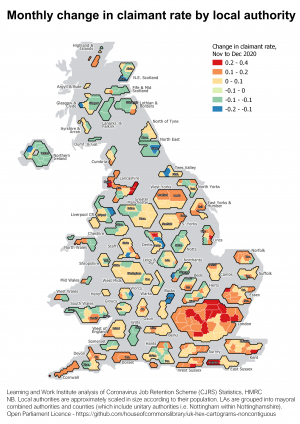