This briefing sets out analysis of ONS labour market statistics released on morning of 11th August 2020. The data cover the number of people claiming benefits up to July 2020, and employment and unemployment figures for the period April to June 2020.

Stephen Evans, chief executive of Learning and Work Institute
There are now 730,000 fewer people in payroll employment than at the start of the crisis, and 3.4 million people who are out of work and who want a job. While the number of vacancies has re-bounded slightly, there remain fewer job opportunities than at any point seen in the last recession. There are also signs of worse to come. The Coronavirus Job Retention Scheme has helped prevent millions of job losses. But with the scheme coming to an end in October, we risk seeing a second wave of unemployment, with perhaps more than one million furloughed workers unable to return to their jobs. The Government should look again at extending support for jobs in hard-hit sectors, and it must ramp-up employment and training support for those who may lose their jobs.
Explore our detailed analysis

Largest decline in employment in a decade and 3.4 million people out of work and wanting a job

The headline employment level has decreased by 220,000 on the quarter, the largest decrease since the 2009 financial crisis.

However, throughout the pandemic, the headline employment and unemployment figures have not fully reflected the scale of the crisis in the labour market. This is partly due to the success of the Coronavirus Job Retention Scheme in protecting jobs, and partly due to many people who are out of work not being classed as ‘unemployed’, as they have been discouraged from seeking work by the sharp decline in vacancies, or unable to start work because of caring responsibilities.

It is possible to see the scale of the impact through looking at the number of people who are out of work but want a job. Figure 2 shows that while there has been only a small increase in the headline rate of unemployment, there has been a much steeper increase in the number who are economically inactive but who would like a job. Taken together, there are now 3.4 million people who are out of work but would like a job.

Figure 2: The number of people out of work and wanting a job has risen

Figure 3: The number of hours worked per week has increased but remains well below pre-crisis levels

Another place to look for green shoots would be in the job vacancy data. Following the lockdown, the number of vacancies dropped to below half of the 2019 average. ONS analysis suggests that rather than a large increase in job losses, it was this decline in vacancies and hiring that has led to the sharp decline in employment we have seen. There has been a gradual increase as the lockdown has eased, but the number of vacancies at the end of July remained at just 53% of pre-crisis levels.

Figure 4: There are half as many vacancies as before the crisis

With up to 5.5 million workers still on furlough, the end of the scheme risks triggering a second wave of unemployment

The Coronavirus Job Retention Scheme has helped protect jobs and incomes, limiting the rise in unemployment. However, the end of the scheme could lead to hundreds of thousands of redundancies and a ‘second wave’ of unemployment.

HMRC data show that 9.4 million jobs have been furloughed since the introduction of the scheme in April. Many of these workers will have returned to work already or left their jobs, but HMRC has not provided data on how many workers remain furloughed.

Figure 5 – 7.7 million people were temporarily away from work at the end of June

Young people completing their education this year face a very challenging labour market, with the number of vacancies having plunged, and far greater competition for job opportunities.

Preventing a rise in long-term youth unemployment has been a key priority in the government’s response to the crisis. In his financial statement last month, the Chancellor announced a £2billion Kickstart Scheme, which will create short term job opportunities for young people, as well as additional investment to create traineeships and apprenticeships. Further details on the Kickstart Scheme are expected this month, ahead of the first jobs going live in September. 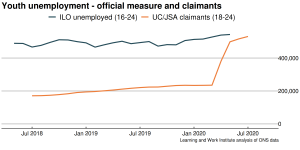